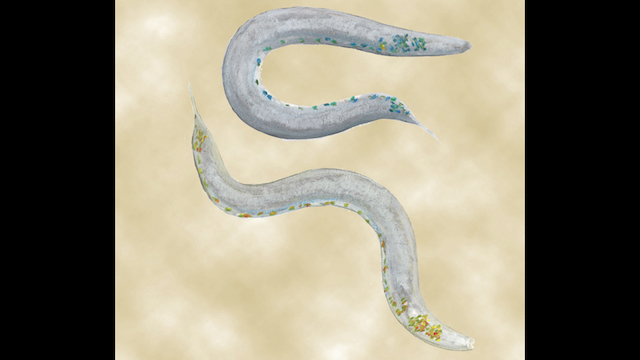 Across the animal kingdom, nearly all creatures sleep or display sleep-like states. The roundworm, Caenorhabditis elegans, does not sleep in a typical day-night cycle like humans and many other animals. Instead, these worms catch most of their z’s while transitioning from one larval stage to another, during a period called lethargus. When these creatures fall asleep, most of their neurons become inactive spontaneously, suggesting that sleep—at least in worms—is a passive state of the brain, according to a study published today (June 22) in Science.

“The condition between sleep to wakefulness is probably one of the most drastic changes that our brains undergo,” says Manuel Zimmer, a neuroscientist at the Research Institute of Molecular Pathology at the Vienna Biocenter in Austria. “How a brain can switch between such drastically different states is not really understood.”

To investigate this process, Zimmer and colleagues examined the brains of C. elegans. These worms do indeed have primitive brains, yet their nervous system comprises only 302 neurons, making it much easier to tackle than, say, the human brain, with billions of neurons, or even the fly brain, which has around 100,000 nerve cells.

Using transgenic worms engineered with a fluorescent indicator that becomes active in response to high calcium levels in neurons (a proxy for neural activity), the researchers imaged the C. elegans brain during the transitions between sleep and wake states by adjusting oxygen levels. Because these soil-dwelling creatures live among low levels of oxygen (10 percent), atmospheric oxygen concentrations (21 percent) induce hyperactivity and wakefulness.

The team discovered that when worms in a state of lethargus were kept at low oxygen levels, they would fall asleep spontaneously, and nearly three-quarters of their neurons would become inactive. Once oxygen levels were brought up to 21 percent, the creatures woke up and their nerve cells regained activity.

According to the study’s authors, these results suggest that sleep is controlled by something called an “attractor state” mechanism. “Consider a marble that rolls into a valley—it automatically is driven to that ground state, and you need some activity or energy to push it out of this valley,” Zimmer explains. Left on its own, it will ultimately stay in that ground state, he adds. And when the worm is tired, the role of sleep-inducing neurons is to deepen the hole of the valley, making it more likely to fall in and more difficult to get out.

“This is a stunning example, using a wonderful technology, that almost the entire nervous system is modulated, and in general, depressed, during the sleep state,” says Paul Sternberg, a nematode biologist at Caltech who was not involved in the work.

“I think [this study] supports this idea that sleep may, in fact, be more of a passive or default state in the absence of sensory input,” says David Raizen, a sleep neuroscientist at the University of Pennsylvania who also did not particulate in the work. “The reason this is interesting is because some of the very earliest theories of how sleep was regulated in mammals viewed sleep as a passive state.”

There are two main theories for how the transition from wakefulness to sleep might occur. One hypothesis is that sleep is controlled by some “top-down” mechanism, such as dedicated neurons that can promote either sleep or wakefulness. The other is that the emergence of sleep is more of a passive process that is established in the absence of arousing inputs. This study provides evidence for the latter theory: Sleep-inducing neurons, the findings suggest, simply put the brain in a state where it is more likely to surrender to slumber, rather than actively controlling sleep.

Some recent studies also support this view. For example, in 2012, a group of researchers discovered that cortical neurons from mice cultured in a dish displayed spontaneous oscillations that were similar to those seen in the cortex during sleep. This suggested that “in the absence of modulations or input, the default state of nervous systems is to go to sleep,” Raizen says.

Mammals, including humans, have periods of inactivity in the brain during deep (non-REM) sleep, Zimmer says. Though these oscillations between up and down states also occur in worms, the inactive periods are much longer lasting and not so regular.

“These differences likely come from the very different neuroanatomy of mammals and worms,” he adds. “While the exact activity patterns of a sleeping worm brain and a sleeping human brain can differ in the details, what can be generalised between worms and humans is that their brains switch from complex to simple activity patterns when falling asleep.”